Lucretia McEvil is one of the recurring major antagonists of davemadson's LT Parodies, introduced in LTIB 21: Close Encounters of the Logo Kind (Bath First, Ask Questions Later for Funny Signs) as the She-Devil along with Lucifer McEvil (formerly known as the Devil from LTIB 13: While Sam's Away, The Logos Will Play to LTIB Lost Episode 100: We've Carried This Far Enough). She is shown to relieve herself all over davemadson and his friends and has cooling powers as seen in davemadson's LT Bloopers 178: The Great Blooper Deception (Part 2). She also has the ability to poison her victims by kissing them, which has resulted in davemadson getting a transfusion in LT Bloopers 137: The Bloopers You Save May Be Your Own.

"Err, is this even in the game?"
This article/section contains fan info pertaining to My Singing Monsters.

Desperate for a role in the Islands' song, Lucretia has attempted to be like Woolabee in almost every way she can possibly imagine... and that required traveling to the region of Hoenn. Lucky for her, she met a Surskit who will do for Woolabee's birds and has provided a beam for her horns so her hair stays in place.

Lucretia McEvil is a Legendary and Ethereal Monster who can only be bought during davemadson x My Singing Monsters events.

Lucretia is a demon with long, brown hair. On her head is a Surskit whose arms rest upon a horizontal beam, constructed to make up for the lack of a natural beam Lucretia has. Her signature outfit is an orange top, shorts, boots and gloves.

The Surskit on Lucretia's head plucks the hair strands tied to the beam to make a lyre or harp-like sound. 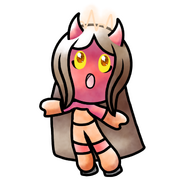 An updated version of Lucretia McEvil's appearance in My Singing Monsters before the switch back to Woolabee's role
Community content is available under CC-BY-SA unless otherwise noted.
Advertisement