View source
watch 01:36
We're Getting Mutants in the MCU - The Loop
Do you like this video?
Play Sound

Vulcanna Ash is one of the major antagonists of davemadson's LT Bloopers and a minor antagonist of Dave & Friends. She was reduced to the status of a mere mortal by Satan in davemadson's LT Bloopers 197: Challenge of Bloopers (Part 2). In The Return of Helena Stoker, she was executed after it was revealed she was still regarded as evil, but in Break in the Blooper Routine, she was revived after a threatened riot in Hades.

This is purely non-canon or fanon.

When she is Gigantamaxed, her ribbons increase in size and she gains a red outline resembling an aura of Gigantamax energy. Three red clouds circle the ribbon on her left horn when she activates her Gigantamax form. The ribbons seem to imitate Vulcanna's hand movements as seen in VULCANNA ASH. (her default form) and RIBBON LASH (where she uses her signature G-Max Move).

Her signature G-Max Move is G-Max Ribbon Lash, a damage-dealing Psychic-type move that confuses the opponent for three turns. 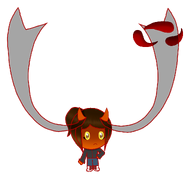 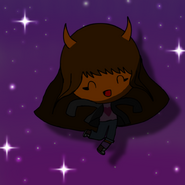 The Starry Sky by HailKyaBear 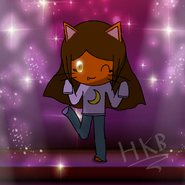 Her as a cat. Artwork: Ashi Ash as a cat by HailKyaBear 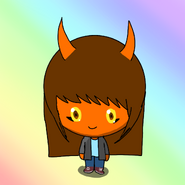 A City in a Lab by HailKyaBear

Stars, Blue Skies, and the Future by HailKyaBear

Community content is available under CC-BY-SA unless otherwise noted.
Advertisement